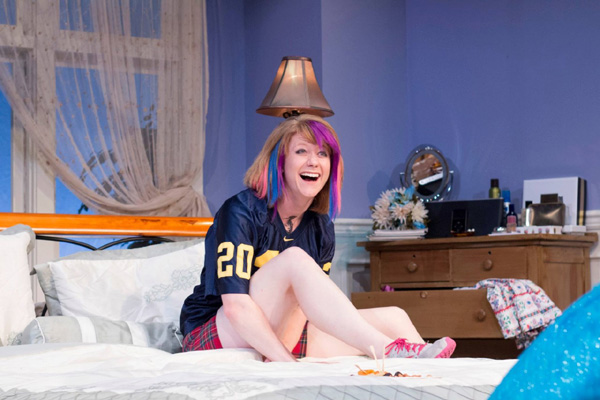 With her jazzy voice, inflamed red hair and that mischievous twinkle in her eye, Harlequin Productions’s resident secret weapon has for years been none other than actor Maggie Ferguson-Wagstaffe. She’s currently gracing Harlequin’s State Theater stage as both Miss Erikson and Lady Saltburn in Present Laughter. She describes this production as a “beautifully written laugh riot.”

A life in theater was less a choice for Ferguson-Wagstaffe than a birthright. Her parents met at the University of Michigan, where each earned a master’s degree in fine arts, her father in scenic design and her mother in acting. The couple worked at the Indiana Repertory Theatre for over 30 years, her mother as both an actress and the associate artistic director, her father as both a scenic designer and the marketing director. “Their desks were 10 feet away from each other,” says Ferguson-Wagstaffe, smiling. “My babysitter was the theater. We joke that I grew up in my mother’s dressing room.”

As a child, Ferguson-Wagstaffe had roles in school plays and productions at the Indiana Rep. As a teenager, she was Indiana’s winner and a finalist in the National Shakespeare Competition, which allowed her to perform in New York City. She also explored music. “I played the clarinet for about 10 years and was very serious about it in high school,” she recalls. “There was a moment when I did choose theater. I grew up surrounded by it. It was always what I’d wanted to do,” she says.

After majoring in theater performance and earning a bachelor’s degree in fine arts from her parents’ alma mater, Ferguson-Wagstaffe moved to Seattle in order to establish a career far from the help of her parents’ connections. “They were so proud of me for doing that and succeeding on my own,” she muses. She quickly found herself auditioning at Harlequin and moved to Olympia. “I actually missed my first audition for Harlequin due to my car’s serpentine belt snapping. I thought I had lost my chance there,” she adds, grimacing.

All’s well that ended well for the actor, who debuted at Harlequin in 2012’s Enchanted April and has now appeared in 16 of the company’s productions. She served as the assistant director for their 2015 production of To Kill a Mockingbird, tasked solely with guiding the young actors cast in the heavy performance.

Ferguson-Wagstaffe feels an affinity toward local theater power-couple Linda and Scot Whitney, owners of Harlequin, because their relationship reminds her of her own parents’. “Working at a theater in which every aspect of the production is important was so refreshing for me,” says Ferguson-Wagstaffe. “That is how things worked in the theater that I grew up in. Harlequin is beautiful, and the environment that the Whitneys have created is so enriching and inviting that I feel like I can take any risk and do anything on that stage. I feel open there to explore artistically and creatively. It feels like home.”

Muses Harlequin artistic director Linda Whitney, “Maggie is among the most creative, inventive, positive and talented of any actor it’s been my privilege to work with. She is alive in the moment and always ready to take a chance that will enrich a scene. She is also extremely generous and engaged with her scene partners.”

One such partner has been local teacher and fellow actor Jason Haws. He describes Ferguson-Wagstaffe as “an absolute blast to work with. She is always prepared, dedicated and thoughtful. She has an extensive knowledge of the craft, and she brings incredible insight to every production. Her character work is so thorough. She understands her character’s arc and objectives, and plays each moment truthfully.” He continues, “I love working with Maggie because she isn’t afraid to try new things, and she is such a good listener. She enjoys this work so much and it shows in her relationships with other actors and her enthusiasm for telling stories.”

Ferguson-Wagstaffe’s experience growing up in the theater inspired her to teach in Harlequin’s Shakespeare Experience for local teens. When the program ended, she helped morph it into the Summer Conservatory for Youth. Both experiences were created to educate young actors on the process of what goes into making a successful performance. “I love teaching kids,” says Ferguson-Wagstaffe. “I love helping them explore and discover new things. They usually have great ideas that don’t always get heard.”

In recent years, Ferguson-Wagstaffe has offered her expertise to Theater Artists Olympia. She directed their 2015 production of Tartuffe and acted in On the Verge and their well-received, timely production of 1984 this winter.

Through her connection with fellow Harlequin actor Christian Doyle, Ferguson-Wagstaffe was cast in the films The Gamers: The Shadow Menace and JourneyQuest: Season 3 by the regional production company Zombie Orpheus Entertainment. The company’s films are completely fan-funded and available online. “We make nerd movies and go to GenCon every year,” says Ferguson-Wagstaffe. “It’s the largest gaming convention in the world.” After sharing the stage numerous times and working together in many different capacities, Doyle proposed to Ferguson-Wagstaffe after the curtain fell on Harlequin’s 2016 run of The Stardust Christmas Enchantment. It’s a romance born of the stage and, coincidentally, not unlike her parents’ story. Doyle and Ferguson-Wagstaffe will marry next year, and Ferguson-Wagstaffe is thrilled to be shortening her last name from 17 letters to five.

Her life is intertwined with the theater. “A life in the theater is not easy,” she says, “but it’s fun. Art is hard because it’s subjective and you get told no far more than you get told yes. It’s easy to give up, but the hard work always pays off. Doing anything else feels wasteful.” 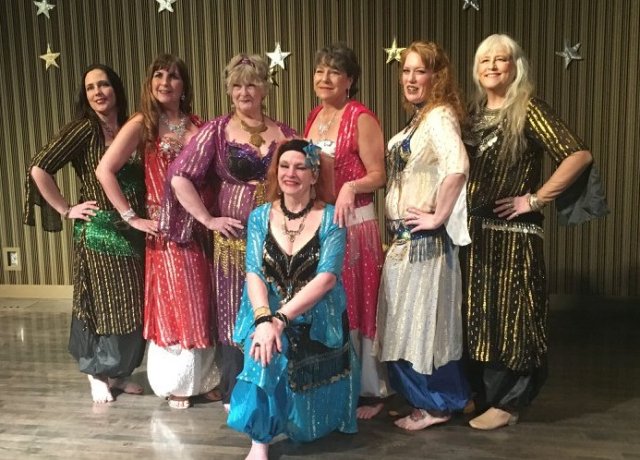 Shake a Shimmy with Mas Uda 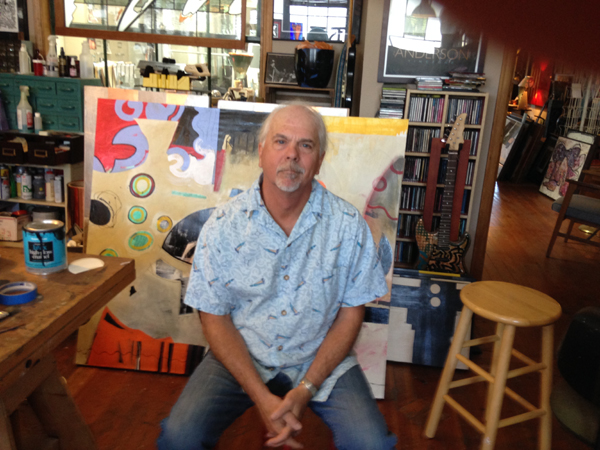